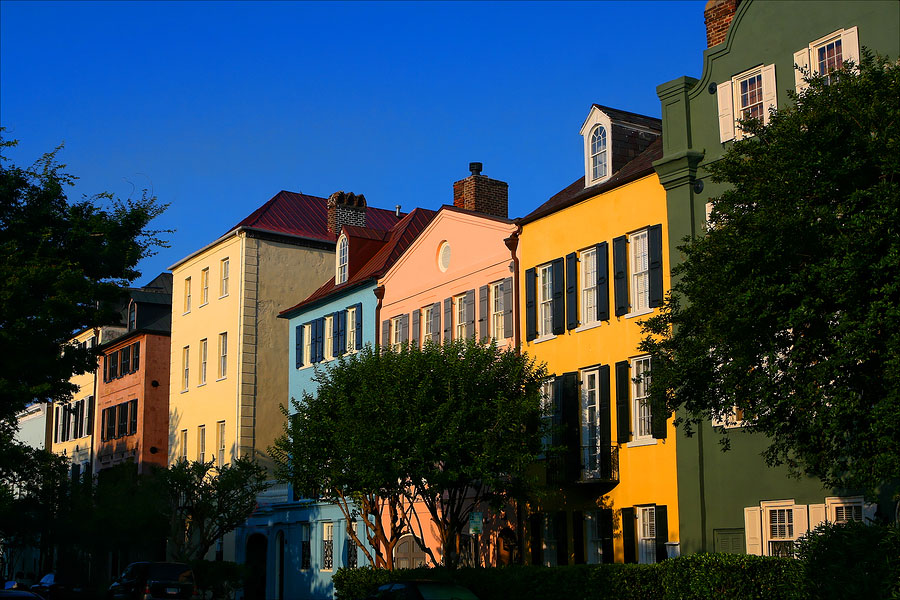 Rainbow Row continues to grow and expand beyond the original row, traditionally defined as buildings on the west side of East Bay Street between Trad and Elliott streets.  There are more colorful structures to the north and south these days. They are even beginning to transform buildings on Tradd Street to the west!

“Color is contagious,” said Kirstopher King, executive director of the Preservation Society of Charleston to the Post & Courier.  Rainbow Row is a relatively recent phenomenon, dating back to the early half of the 20th century.  The buildings were originally commercial storefronts on a relatively prosperous waterfront along East Bay Street. The old block fell into economic decline after the Civil War. The decline worsened once commercial shipping moved further north on the penninsual. The area grew into slums.

Rainbow Row Revitalized One Colorful House at a Time

In the early 1930s, Dorothy Legge, the wife of S.C. Supreme Court Justice Lionel K. Legge bought and restored a house with addresses spanning from 99 to 101 East Bay Street. She repainted the house with the same colors that are famous today. Dorothy said she chose to uplift the block “with a pretty color, and I had it painted this sort of peachy pink.”

She convinced her friends to invest in the area, including preservation pioneer Susan Pringle Frost, who bought and renovated a home on the street.  By 1936 “Rainbow Row” became the unofficial name of the street according to the News and Courier.

The Charleston peninsula began redeveloping during the late 1930s. The Federal Housing Administration’s assistance aided this development, as it helped finance home purchases as part of the 1934 New Deal. Local and federal governments encouraged residential redevelopment, especially in areas like Charleston that were experiencing a housing shortage.

Charleston County Public Library historian Nic Butler said to the Post & Courier that “the Legge project on East Bay Street gets referred to multiple times as an exemplary project.  The government (at that time) encouraged people to invest in real estate, because real estate is a safe investment, and that’s where you need to put your money if you have any in this Depression.”  He added that “one of the reasons that name Rainbow Row became so popular, for one thing it’s right on the waterfront, tourists are driving right by it, but also it is a very visible success story.”

When it’s time to build, renovate, or upfit your commercial space, call Carolina Services Inc. We are Charleston’s premier community space planning and improvement company.  Contact CSI to see how we can help design, manage and implement innovative and cost-effective solutions to your commercial space.