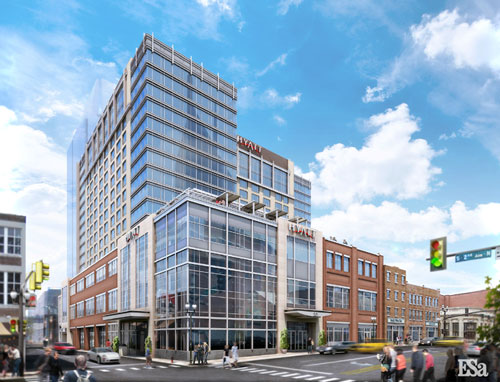 Charleston City Council pulled a proposal from its recent meeting to place a temporary ban on downtown hotel projects recommended by new Charleston Mayor John Tecklenburg.  The Council called for a study instead by its city staff during the next 90 days about the commercial real estate matter, with a follow up report due to the Council discussing issues related to downtown development of new hotels.

The Post and Courier wrote an extensive article about this issue a day ahead of the February 23rd Council meeting. The article discussed the rate of new hotels being built on the peninsula.  Mayor Tecklenburg called for a moratorium during his campaign for mayor because he believes the number of new downtown hotels that have been built or are on the drawing board are not sustainable.

Currently 4,826 new hotel rooms have been built or are under construction in downtown Charleston. There are an additional 763 more rooms that have been given the necessary zoning approval to go forward with construction.  None of these commercial real estate projects will be affected by any future proposals by City Council. In the last year, the 41 room Spectator opened on State Street and the 50 room Grand Bohemian opened on Wentworth and Meeting Streets. Two new Hyatt hotels,  with a total of 304 rooms, opened on Upper King Street.

Mayor Tecklenburg acknowledged that the Council has “moratorium fatigue” due to a 2014 moratorium in place for new businesses that serve alcohol in the city’s entertainment district and the 2015 “gathering place” moratorium, according to The Post and Courier.

Various Groups Weigh In on Moratorium on Downtown Hotels

Bryan Derreberry, president and CEO of the Charleston Chamber of Commerce expressed the Chamber’s opposition to a moratorium during the mayoral campaign and continues to hold this position. Mr. Derreberry was quoted in the newspaper saying the chamber still dislikes a moratorium because “it creates a ripple effect that can harm the city’s reputation among companies and investors seeking to conduct business and make additional investments in Charleston.”

Founded in 1976, Carolina Services, Inc. (CSI) is Charleston’s premier commercial space planning and improvement company.  We pride ourselves on providing customers with the highest quality construction solutions that are on time and within budget.  Contact us to see how CSI can help design, manage and implement innovative and cost effective solutions for your commercial space.